There are some things about both Rick games that I still haven't worked out, even after all this time playing the game and making this website. So anyone who looks at this page and can shed some light on what's going on here, it would be appreciated!

Egypt has a reputation for being a mysterious place... and the Egypt level in Rick 1 is no exception, with four appearances in this section, one from the MSX game.

All these images are shown at half size, click on them to see the full size version.

Does anyone know where this screen came from? It may (or may not) be from the original authors' "extra levels add-on pack" (see the MSX page for more details). 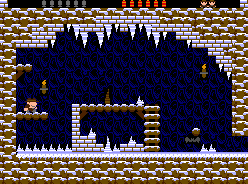 Egypt's third mystery is on the final screen, where most gamers will not reach without a significant amount of cheating, and 8-bit gamers won't see this at all as Rick would be well into Schwarzendumpf Castle by now...

The mystery here involves two holes in the wall, marked in red alongside the red hieroglyphics, which Rick can poke but it appears they do nothing. 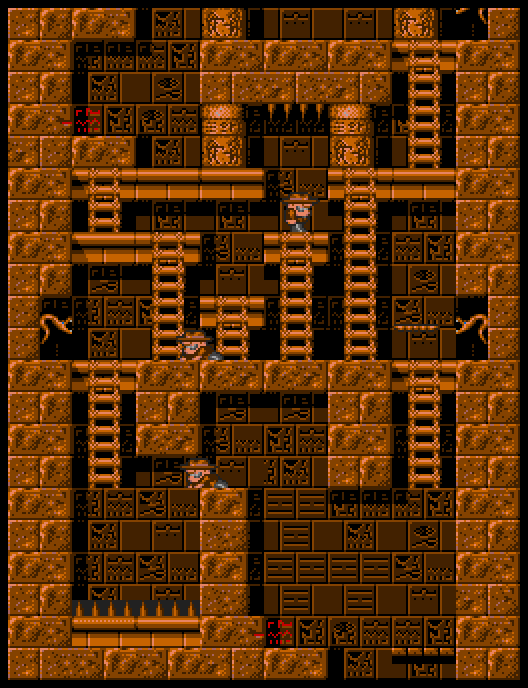 I have tried to see if it affects Rick's ability to take the Pharaoh's Head bonus further up the screen (shown below). This is guarded by spikes, which will skewer Rick horribly if he tries to take the head. I also remember once having a terminal problem blasting the rock out the way on the platform above, though this seems to be an isolated incident. 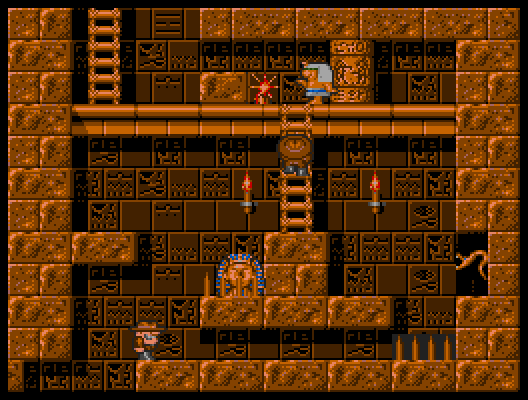 Stephen (bigorno) says:
Not sure if they trigger anything. I'll have to check. As for the block at the (almost) top, the trick seems to be that you need to blow a dynamite somewhere between the top of the ladder and the block, and not to drop the dynamite as close to the block as possible. I'll come back to you with more info.

This one was brought to my attention by Benoist Pinçon. On entering screen two, you see the passage where Rick is required to wait for the block to drop down before he can pass and shoot the guard. 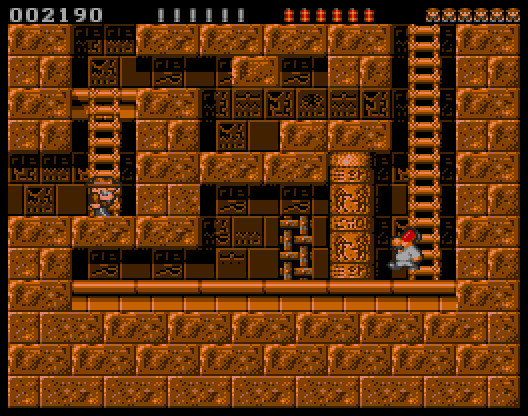 However, there is a spurious bit of scenery at the bottom. If Rick walks over to the part of the wall with the interlaced strips, as seen below, the game gives the same "ding" that you hear when changing some screens, or moving through an important part of the level. 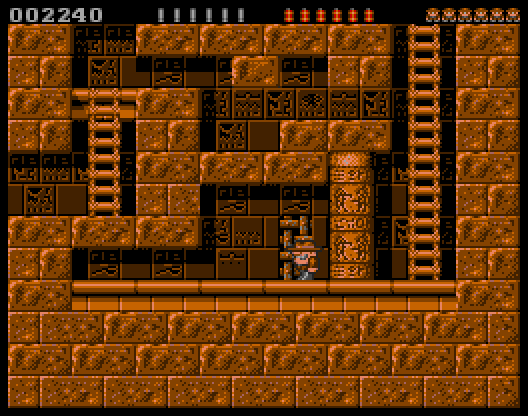 What does this "ding" signify? Has a part of the level opened up that is inaccessible if Rick does not take this small detour? I have tried to see if it affects collecting the Jewel of Ankhel on screen four, or whether it helps in crossing the infamous spike pit on screen six, but so far I can find no significance to the "ding". If this means anything, then it's the most deviously hidden bonus I have ever seen.

Stephen (bigorno) says:
This might very well be what I call 'time bonus', I'd need to check with the code (which I don't have at hand right now). At some points in the game there are 'start gates' that trigger a bonus countdown, and 'stop gates' that add whatever remains of the bonus to your score. The fastest you go from the start gate to the stop gate, the more points you get. Such gates are usually invisible... and nobody really cares about the score, really. I'm 75% confident that this is the right answer. I'll look deeper into it.

Simon Phipps says (and he should know):
About the mysterious 'dings' that occur if you get through a level quickly enough are correct - if you check out your sprites page you'll see that on one of the screens there were sprites marked 'Score Gate On' and 'Score Gate Off' - these are what we used to place in the world and mark when the timers were switched on and off.

This mystery is partly in response to an email from James Brennan, who wanted to know how to beat the guard's timing trap on screen seven. Shown below is an excerpt from the Map of Egypt on this site.

To beat this, you must take the right hand path. You have to move Rick fairly quickly off the left hand edge of the platform above the guard (with the hieroglyphics marked in red) and hit right immediately, so that you fall to the right of the guard. Then whip out the gun and decorate the Egyptian scenery a colour called "Hint Of Brain". If the guard starts moving before you're in a position to shoot him, you're toast. 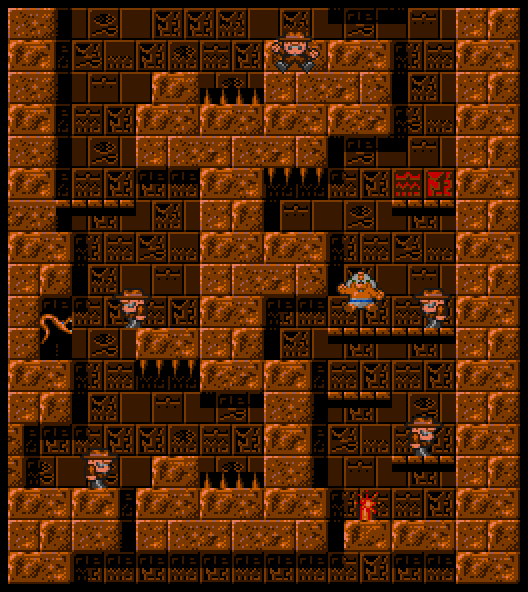 It would seem that you're also toast if you take the left hand path. However, I've always thought that there must have been some way through it - the hole in the ground would be a clue. I've tried dropping dynamite on the bricks round the hole, I've tried dropping dynamite through the hole (it doesn't fit!), I've tried firing the gun and poking the stick at every wall and every object I can think of. But, so far, the ground has failed to open up. Is it actually a dead end, or is there something I haven't found?

Stephen (bigorno) says:
Dead end, there is absolutely nothing that can be moved, removed, exploded, dismounted, or whatever, down there to the left. I'm 100% confident that this is the right answer.

If anyone out there is MSX-land has played the MSX version, and has solved the mystery of either: (1) Where to dynamite the wall so that Rick can reach the short platforms above the spikes, or (2) if there's another way to get through - do tell me. The people who wrote the game have forgotten how to do it! 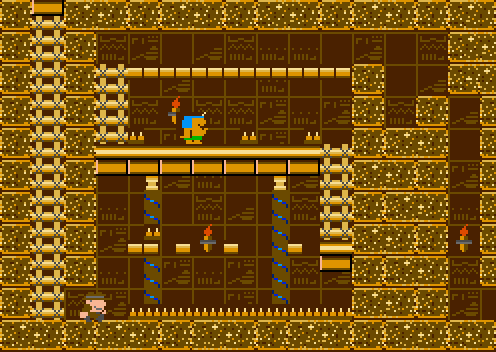 Cobra1 found the answer, and hinted that the solution exploited a bug in the code. Before he could tell me how it was done, I had a wild stab and found it. The solution is now on the demos page.