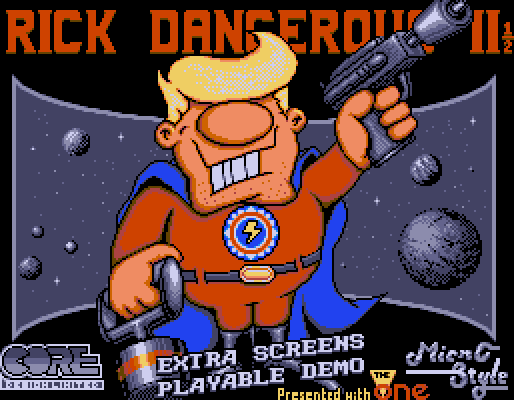 I was alerted to its existence by Morfar when he sent me the Amiga versions of Rick 1 and 2. I was sceptical of what it was originally, given the confusion surrounding the existence (or not) of Rick Dangerous III. He sent me a screenshot to convince me it existed, and I figured it was just a screenshot of the Fat Guy's Headquarters.

It isn't, it's a new level, albeit a short one. It's a bit like one screen of the Fat Guy's Headquarters in that it uses the same graphics and nasties, and has an all-new animated cut-scene at the beginning. It's a short sequel to Rick 2 in the same way as "Dizzy 3½: Into Magicland" on the Spectrum was a prequel to Dizzy 4.

There's a manual for Rick 2½ at AmigaMOS, though it's rather short. Oddly enough, it says there are ten new screens. I can only count two before the game finishes, though my definition of a new screen may not be the same as theirs.

And, yes, I have made a map of the level.

I have found a number of download sites for Rick 2½; some of these may work, some may not, but try them anyway.

I don't think there are any, apart from WinUAE 0.8.17's save-snapshot facility. Really, they're unneccesary as you'll get to the end soon enough anyway.

There's only one, really... but here it is anyway.