So it seems there are other Rick devotees out there determined to bring Rick to ever more people who never had the experience first time round. Here's a guide to the ones I've found.

This section includes new levels of the original two games.

XRick is a remake of Rick Dangerous 1, written in SDL. It has now been ported to enough different platforms to make it worthy of its own page.

"The man with the hat is back!" declared fr4nz in my mailbox one day, heralding the development of Rick Dangerous Advance. From what I can see it's a direct conversion of Rick 1 for the Game Boy Advance. Though, as I don't have a Game Boy Advance, I won't be able to play it without an emulator...

Unfortunately, Core Design wouldn't release the licence, so RDA has been canned. Whether there will be any release of any kind, I won't know. One thing that's evident from the website below, is that it looks like the developers have built their own level editor, and can change graphics at will, leaving the door potentially wide open for some new levels.

Incidentally, I've been asked by others wanting to start up Rick remakes whether I have the graphics. I don't, but the Spoutnick Team may be able to help, as RDA started off life with the original graphics.

Check out Spoutnick's latest creations at spoutnick.free.fr. There's still a section about Rick Dangerous Advance in there so you can look at the new graphics... 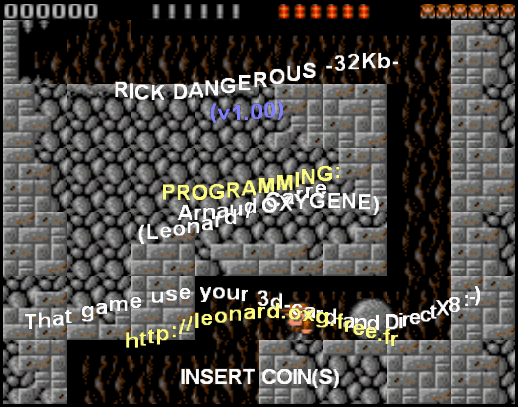 So far, I've been contacted about this by Arnaud Carré (the programmer), Edward Barnes and Rémy Trotin about this remake, which fits into 32 KB of memory, which is even smaller than the original versions. Admittedly, though, it's a bit of a cheat, as it also requires DirectX 8 and that takes up a lot more than 32 KB!

However, see it this way: one of the greatest achievements in computing history was in 1982, when Artic Computing released 1K Chess for the ZX81. That's right - a game of chess (minus a few special moves) that fit into less than a kilobyte. There was actually a bit of room to spare. But we're not counting, for instance, the ZX81's 8K ROM chip...

Gameplay-wise, the vertical scrolling is a bit jerky but otherwise it's a reasonably faithful conversion of the ST version of South America. Note also that there's some missing Goolus and extra bonuses here and there, as shown below. Unfortunately, Rick has lost his stick, but it's only used for poking a bat in this level so no screens are lost. Many of the sound effects are missing, though - only picking up a bonus or extra ammo will make a sound. To make up for this, the game borrows some rather good Atari ST soundtracks from Enchanted Lands, Wings Of Death, Sowatt and Turrican 2.

The graphics are switchable between normal (i.e. blocky) and filtered (i.e. fuzzy) by pressing F; press W to switch to Wireframe mode which is useless to play the game, but reveals traps and movable objects, similar to Visualisation mode in xrick.

Here's a couple of screenshots... one from right at the end. Obviously, in 32 KB, there's no room for a spectacular end sequence!

You can find the 32 KB remake at leonard.oxg.free.fr/rick32/rick32.html

There is a short video trailer, albeit a 5 MB AVI file, on the site, where you can watch some of the features. It's essentially a port of the Amiga version, but does include a few oddities - there's a flashy star effect when Rick picks up a bonus, and Rick has the ability to throw dynamite at the Goolus.

I do find it bizarre that this remake, which is being sold rather than given away (presumably due to the platform it's made for!) has been given the go-ahead, whereas the Spoutnick Team's intricate remake of Rick 1 was canned when they couldn't get the licence. Maybe this is why the title was changed from "Rick Dangerous J2ME" to "Rick Ranger 1965".

A word of warning, though. Not long after downloading the files for this game, I found a Java-based virus on my hard drive, which may or may not have come from the MobilExpansion site. Exercise extreme caution!

Scottige has recently been busy remaking Rick 1. This version has a slightly different feel to it - not least from the redrawn graphics, where Rick has grown to twice his usual height and looks like a cross between Desperate Dan and Crocodile Dundee.

What makes this interesting is Scottige's promise that it will not be a straight remake - there will be a few new screens dropped in there, possibly including making a bit more of the bat which appears only once in the real game. Expect extra cut-scenes, too.

Until it's done, here's a screenshot so you can see what I mean. 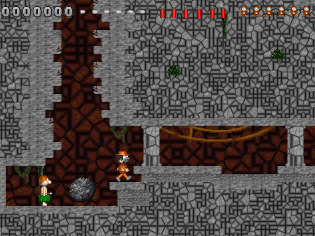 Keep up with the latest developments at www.scottige.co.uk/rick.htm.